Kevin Thomas Jr. and Snow Racing to join All Star Circuit of Champions full-time in 2022 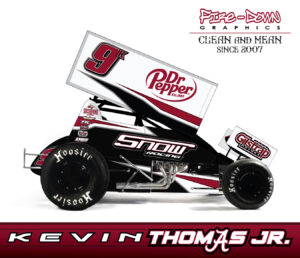 BROWNSBURG, Ind. (December 7, 2021) - It is official: two-time Indiana Sprint Week champion and former USAC National Sprint Cars Series competitor Kevin Thomas Jr. is hitting the road full-time in 2022, but this time with a wing on, as the Cullman, Alabama-native is set to join the FloRacing All Star Circuit of Champions presented by Mobil 1 for a full-on campaign aboard Clayton Snow’s Snow Racing No. 9K.

Highlighted with 58 dates across 11 states, the 2022 All Star agenda boasts a stout lineup of high profile events with all the Series’ major blockbusters making their return. As tradition has it, Series competition will begin in early February with a short stint of non-points action across Georgia and Florida, kicking off with a two-day visit to Senoia Raceway on Friday and Saturday, February 4-5. A first-ever All Star invasion of the central Georgia venue, the weekend pair will award $8,000 and $10,000, respectively.

“I couldn’t be more excited to be making the move to the All Stars in 2022. We have partnered with Snow Racing for the upcoming season and I’m thrilled for the opportunity,” Thomas said, powered by Dr. Pepper, McDonald’s, Ronald McDonald House Charities, Silva Ranches, and Triple-X Chassis. “I have enjoyed getting to know these guys and forming a team with them. Clayton [Snow] has worked extremely hard to put all of this in motion and I can’t thank him enough for taking a chance on me.”

Following his visit to The Peach State, Thomas’ early-season All Star campaign will continue with a pair of DIRTcar Nationals appearances at Volusia Speedway Park on February 8-9, followed by another pair of Florida stops at East Bay Raceway Park on February 14-15. All four visits to Volusia and East Bay will award $6,000 top prizes.

Thomas does own one wing sprint car victory, occurring in 2017 during ASCS Southwest Region competition at Arizona Speedway in Queen Creek, Arizona.

“I’m confident that my experiences will go hand in hand,” Thomas continued. “It’s going to be a fun, yet challenging season for our team. I feel like we have the resources to be as prepared as we can and to help my learning curve. I’m ready to get started.”

For those seeking additional information pertaining to the All Star Circuit of Champions, please visit www.allstarsprint.com. The 2022 schedule is now available online.

Kevin Thomas Jr. and Snow Racing would like to thank all of their marketing partners including: Dr. Pepper, McDonald’s, Ronald McDonald House Charities, Silva Ranches, and Triple-X Chassis.

Watch the All Star Circuit of Champions live via www.floracing.com.

About the All Star Circuit of Champions:

All Star Enterprises, LLC, wholly owned by Tony Stewart, d/b/a the All Star Circuit of Champions, is a winged sprint car series. The All Star Circuit of Champions Sprint Car Series is one of the oldest traveling 410 sprint car organizations and is a staple of grassroots, open-wheel racing. Formed in 1970 by Bud Miller, the series has largely been considered the first 'outlaw' Sprint Car organization of the modern era. Motorsports entrepreneur Tony Stewart agreed to terms with Guy Webb to become the sole owner of the original winged sprint car tour in January of 2015.

Tweets by @ktmotorsports9k
© 2021. All Rights Reserved