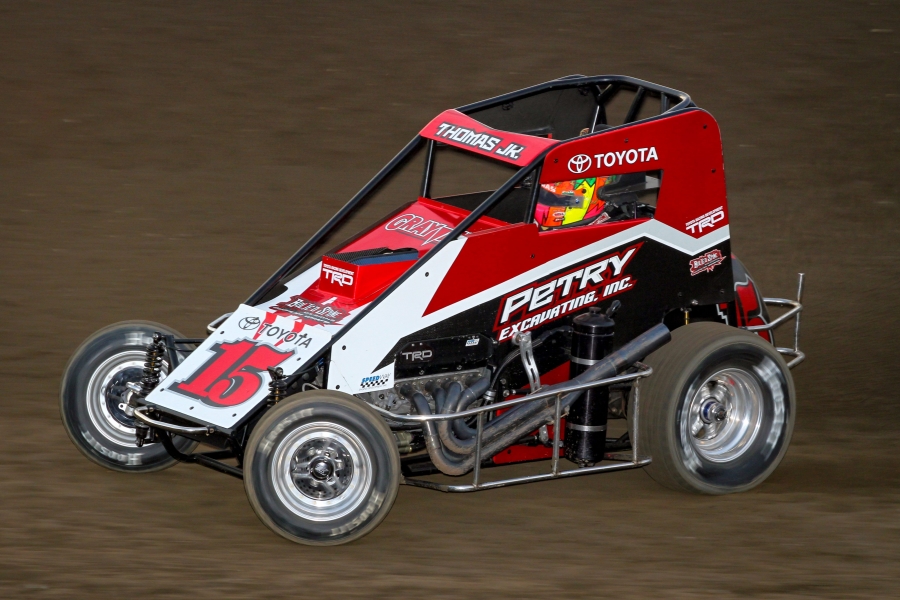 The Cullman, Ala. driver competed for Petry to conclude the 2017 season and began the 2018 campaign for the team, finishing 13th in the 2017 “Turkey Night Grand Prix” at Ventura (Calif.) Raceway, then started 2018 with a 15th at the “Shamrock Classic” in Du Quoin, Ill. and a 10th at the “Kokomo Grand Prix” in Kokomo, Ind.

Thomas, the 2018 USAC AMSOIL National Sprint Car runner-up, ran the remainder of the 2018 Midget season for Joe Dooling, finishing 8th in the standings with a pair of victories at Kokomo during “Indiana Midget Week” and the “Chad McDaniel Memorial” at Solomon Valley Raceway in Beloit, Kans.

A year ago, the Thomas and Petry connection began the season with two consecutive midget victories at Bubba Raceway Park in Ocala, Fla.  The 2019 USAC National Midget season debuts at the same 3/8-mile D-shaped dirt oval this year with “Winter Dirt Games X.”

Thomas already has the comfort level of racing with a team he holds previous experience with.  To start off at a venue that they’ve hit their highest successes at is a nice springboard for what Thomas believes will be a successful venture.

“I’m really excited to be back with Scott, Terry, Tim and the rest of the guys,” Thomas said.  “I have such a blast racing for them and look forward to a long-lasting relationship.  They have put in the effort and time to become a top-tier team.  Now it’s time to keep building and come out strong in Florida again.”

Thomas has been one of the most successful drivers in USAC over the past several seasons.  Thomas owns four career USAC National Midget feature victories and 25 USAC National Sprint Car wins, tying him with Steve Butler and Jay Drake for 18th all-time.

The 2019 USAC NOS Energy Drink Midget National Championship schedule features its largest slate of events in over two decades with a myriad of notable races dotting the U.S. map.  The season begins with the series debut at Bubba Raceway Park in Ocala, Fla. for the kickoff of “Winter Dirt Games X” with two complete shows on Feb. 8-9.  The head indoors on Mar. 9 for the “Shamrock Classic” at the Southern Illinois Center in Du Quoin, followed by the “Kokomo Grand Prix” doubleheader on Apr. 5-6 at Indiana’s Kokomo Speedway.  A double-dip at Tri-City Speedway in Granite City, Ill. and Federated Auto Parts Raceway at I-55 in Pevely, Mo. follow on May 17-18.

A busy summer stretch takes you to the Hoosier State for the 15th edition of “Indiana Midget Week” from June 4-9 at Montpelier, Gas City, Putnamville (Lincoln Park), Bloomington, Lawrenceburg and Kokomo.  A stop at The Dirt Oval at Route 66 in Joliet, Ill. precedes Mid-American Midget Week, which includes visits to Meeker, Oklahoma’s Red Dirt Raceway on July 9, Solomon Valley Raceway in Beloit, Kans. on July 10, the two-night “Midwest Midget Championship” at Jefferson County Speedway in Fairbury, Neb. on July 12-13 and concluding at Missouri’s Sweet Springs Motorsports Complex on July 14.

The end of July kicks off “Pennsylvania Midget Week” between July 30 and Aug. 3 at Grandview, Action Track USA, Path Valley, Linda’s and Lanco.  The second installment of the “BC39” returns to The Dirt Track at the Indianapolis Motor Speedway on Sept. 4-5 followed by the 38th running of the “4-Crown Nationals” at Eldora Speedway in Rossburg, Ohio on Sept. 28.  The Midwest season finishes up at Tri-State Speedway in Haubstadt, Ind. on Oct. 19 before the series heads west for an expanded docket of races starting with the 52nd annual “Western World Championships” at Arizona Speedway on Nov. 15-16, before heading to California’s Placerville Speedway on Nov. 20-21, Bakersfield (Calif.) Speedway on Nov. 23 and the season-capper on Thanksgiving, Nov. 28 at Ventura (Calif.) Raceway for the 79th “Turkey Night Grand Prix.”